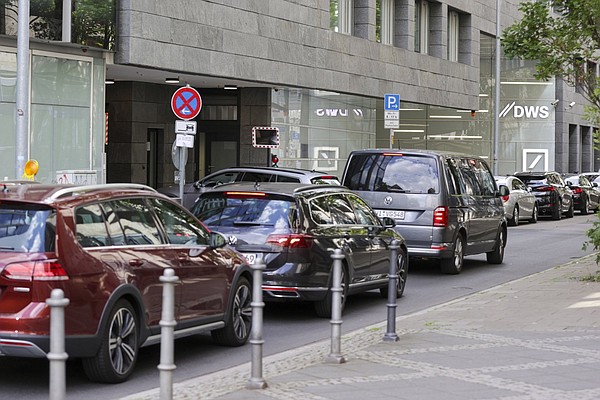 Deutsche Bank and its asset management unit have had their Frankfurt offices raided by police, adding to the legal headaches facing Germany’s biggest lender.

Law enforcement officials entered the twin towers where Germany’s largest lender is based, as well as the nearby premises of the DWS Group, on Tuesday morning, according to a prosecutor’s statement which confirmed an earlier Bloomberg report. . The search is linked to accusations of greenwashing (misinformation disseminated by a company to promote an eco-responsible public image) against the asset manager.

“We have continuously cooperated fully with all relevant regulators and authorities on this matter and will continue to do so,” a DWS spokesperson said. Deutsche Bank said the “measures” are “directed against unknown persons in connection with greenwashing allegations against DWS.”

DWS has been the subject of regulatory investigations in the United States and Germany after its former director of sustainability, Desiree Fixler, alleged last year that the company had inflated its ESG (environmental, social and governance). As well as adding to the list of regulatory and legal issues for Deutsche Bank CEO Christian Sewing, the raid is a high-profile early example of lenders facing legal ramifications for greenwashing.

Shares of DWS fell more than 5% on the news and Deutsche Bank fell 2.6%. While DWS is publicly traded, Deutsche Bank has an almost 80% stake.

Fixler said DWS’ claims that hundreds of billions of its assets under management were “ESG-integrated” were misleading because the label did not translate to meaningful action by the fund managers involved. DWS has since stopped using the label.

The Frankfurt prosecutor said he opened his investigation in January, sparked by reports of Fixler’s allegations. She has since found sufficient evidence that “contrary to statements in the sales prospectuses of DWS funds, ESG factors have in fact only played a role in a minority of investments”.

The raid involved around 50 people, including staff from the BaFin watchdog, one person said. It targets as yet unidentified DWS staff and cadres.

DWS CEO Asoka Woehrmann fired Fixler in March last year, saying in a memo to staff that his unit had not made enough progress. She sued for unfair dismissal but lost the case in a Frankfurt labor court in January.

“The German police are doing a very good and thorough job,” Fixler said by phone. “I am glad to see that this investigation is deepening to obtain new evidence.”

The upper echelon of Deutsche Bank has also been dragged into the greenwashing affair. Regulators investigating the matter asked the lender about the role of deputy chief executive Karl von Rohr, who is also chairman of the DWS supervisory board. He was the primary recipient of Fixler’s email when she first reported her ESG concerns to DWS shortly after her dismissal. Von Rohr helped organize an external audit of his claims that cleared the DWS, people familiar with the matter said.

For Woehrmann, the raid is another blow after coming under scrutiny over his use of personal email for business purposes and the role his relationship with a German businessman played in the deals . Couture has supported Woehrmann so far, not least because DWS has performed well under him. But the flow of negative news has frustrated the lender’s management, Bloomberg reported.

The latest raid comes about a month after Deutsche Bank’s headquarters were raided on suspicion that it was too late to flag potential money laundering. While Sewing has long sought to shed a history of heavy Deutsche Bank fines and restore relations with regulators, a number of new issues have emerged since he took office four years ago.

The bank was recently found guilty of breaching a deferred prosecution agreement with the US Department of Justice, and it received a scathing letter from the US Federal Reserve over flawed controls last year. BaFin has launched an investigation into Deutsche Bank over private communications and the lender is facing a similar investigation in the United States, Bloomberg reported.

Schapiro: Started in Virginia with a whine, ended with a bang | Government and politics